Besides being well-known for their ‘elite’ status, the Ivy League also has some quirky features and history that most people and students don’t know about.

Here are a handful of Ivy League fun facts that shed new light on these famous institutions, making them more human than fancy.

If you haven’t done so already, take a second to check out our SAT prep and ACT prep course options today. 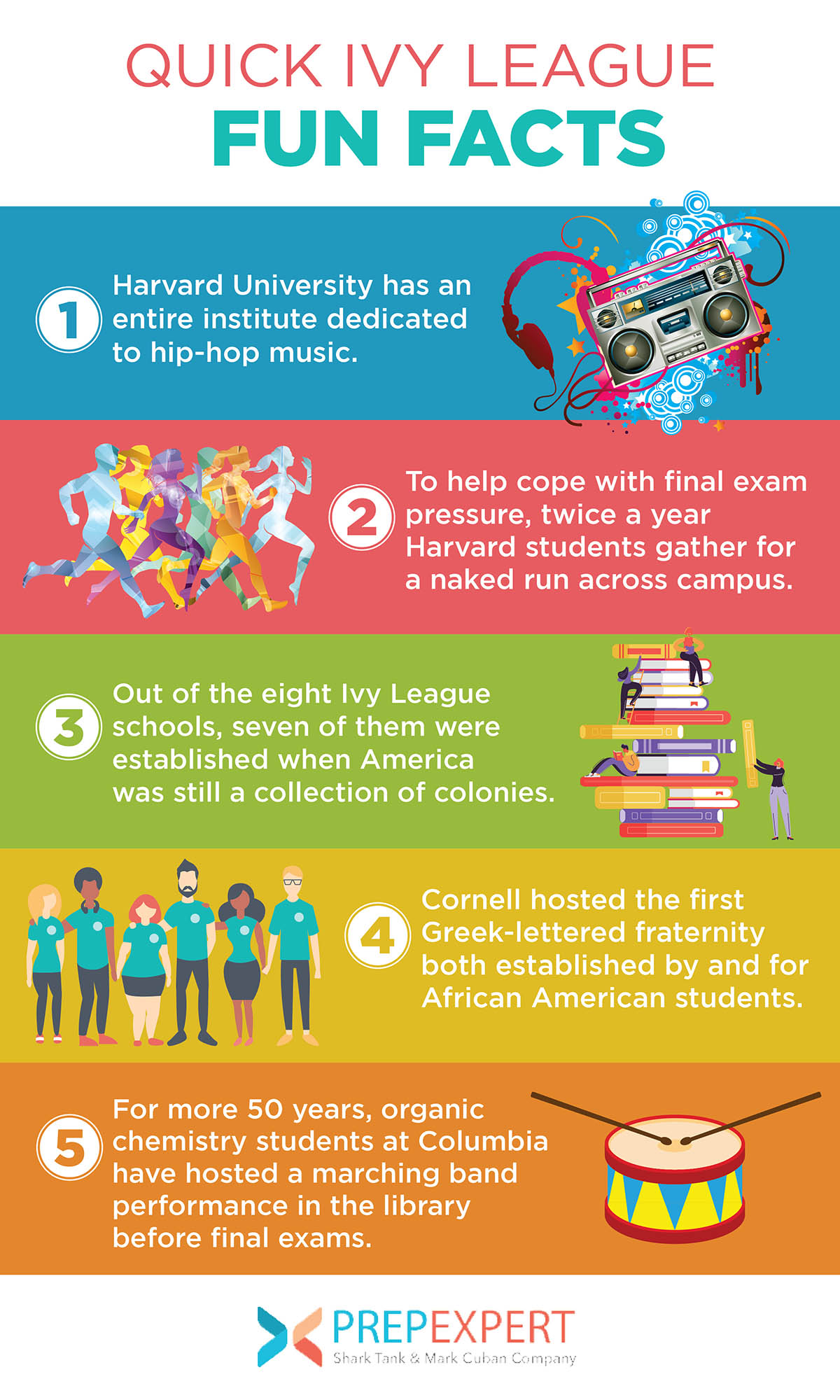 Believe it or not, Harvard University has an entire program dedicated to hip-hop music.

Back in 2002, the Ivy League university established the Hiphop Archive and Research Institute on campus. You may be asking yourself why would Harvard do that?

The program was established with the goal of providing resources to explore “the most influential, education and social movement for youth and young adults” for the past forty years or so.

While it may sound strange that an Ivy League school would dedicate funds and staff for this purpose, it does show that the Ivy League is willing to recognize and change with the times.

Everyone knows that exams cause anxiety; they always have and will do so. To help better cope with the pressure, twice a year Harvard students gather together for a naked run across campus. These runs happen at midnight the night before final exams commence.

While not confirmed, people think that the practice originally evolved out of the earlier tradition of students opening and yelling out of their windows before exams. Whether it’s by yelling or running naked, the end result is the same – a clearer mind before testing.

Virtually all of the Ivy League schools were established before the United States formed.

Out of the eight Ivy League institutions, seven of them were established when America was still a collection of colonies:

Only one Ivy League school was founded after the American Revolution: Cornell was established in 1865.

A select few students at Columbia University like preparing for exams…with a marching band.

Similar to the Harvard naked run, Columbia’s marching band prep is a purposefully silly activity designed to relieve stress before exams. In this case, though, the fun is localized to the organic chemistry final exams.

For more than five decades, organic chemistry students enjoy ‘Orgo Night’ in which the marching band conducts an hour-long program in the library, complete with jokes and music. Given how notoriously difficult organic chemistry is for students, the show helps lift spirits before final exams.

Cornell hosted the first Greek-lettered fraternity both established by and for African American students.

Established in 1906, Alpha Phi Alpha was created as a fraternity for students who were traditionally excluded from such organizations. Alpha Phi Alpha has grown into more than 400 chapters since first created.

Moreover, since 1940, it now accepts students of all ethnicities. None of that change would have been possible without that first Cornell chapter over one hundred years ago.

Most movies you’ve seen showcasing Harvard weren’t filmed at Harvard at all.

Strange as it sounds, most films that feature Harvard University as a setting are filmed elsewhere. The reason being that the 1970 production of Love Story saw damages caused to campus property.