Once again, we’re taking a moment to address a question that we’re often asked. That question is “weighted vs unweighted GPA, which one should my child have?”

Let’s take a few minutes then to address what a weighted GPA is, what it isn’t, the differences between them, and how colleges evaluate them when looking at applicants.

Besides learning about GPAs, take a second to check out our various SAT and ACT prep courses now. 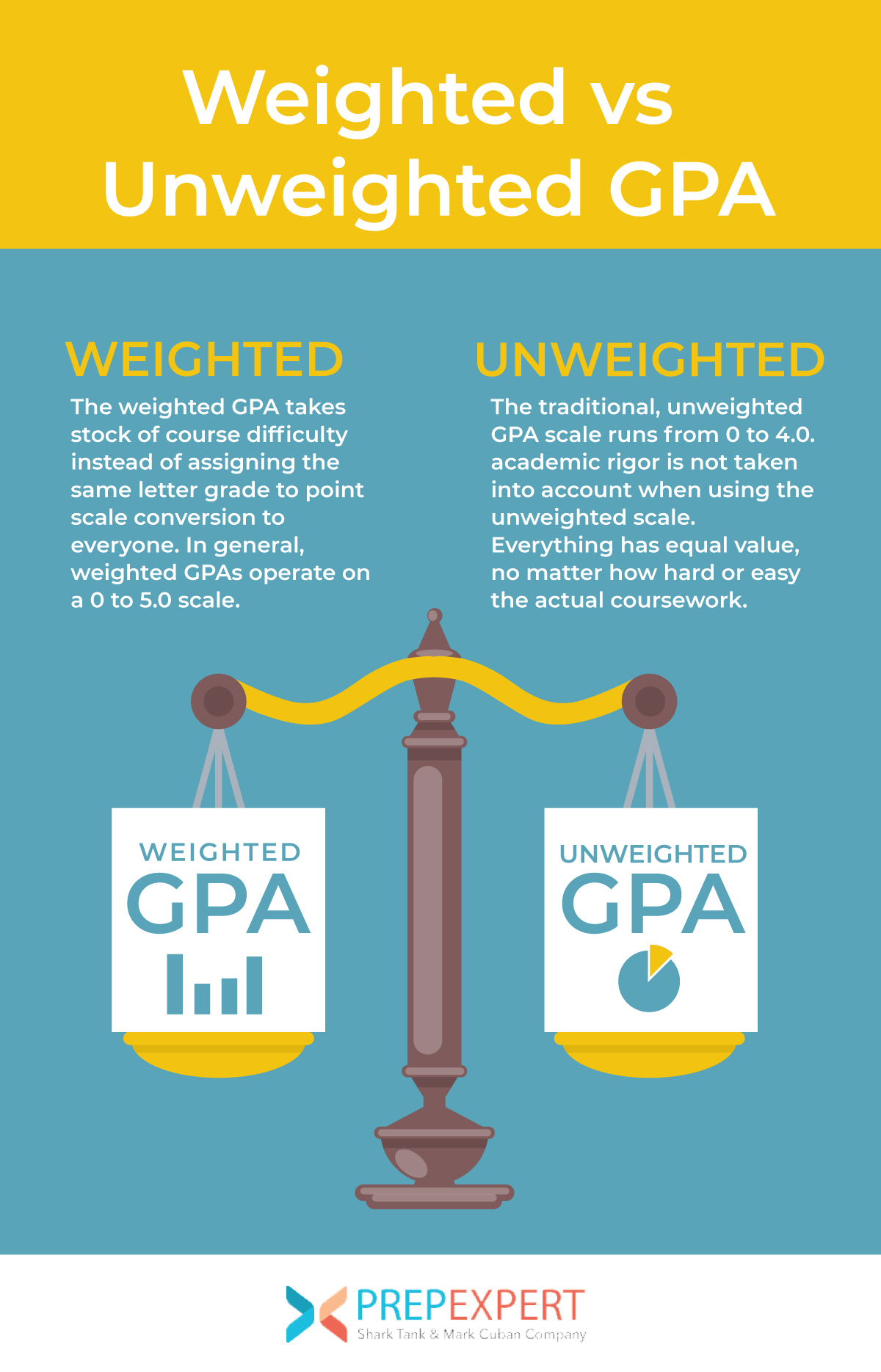 Here’s what educators are talking about when referring to an “unweighted GPA.”

Virtually every school student has had an unweighted GPA before. The term “unweighted” refers to the scale used for calculation. The traditional, unweighted GPA scale runs from 0 to 4.0. That’s it.

Here’s how that breaks down between letter grades and actual scores:

When you receive an “A” on an unweighted scale, it’s simply an “A”. It doesn’t matter whether it’s an “A” from an AP class, honors course, or regular curriculum class.

An “A” is simply an “A”. Moreover, there are no changes across class types in this scale, an “A” in Biology has equal weight as an “A” in Physical Education.

In short, academic rigor is not taken into account when using the unweighted scale. Everything has equal value, no matter how hard or easy the actual coursework.

On one level, it’s easy to say that this is fair for everyone, no one is given preferential treatment or placed at a significant disadvantage. However, this concept is questioned by the weighted GPA scale.

Let’s now examine what the ‘weighted’ GPA is and how it is calculated.

The weighted GPA is used by many high schools to help better represent students’ actual academic accomplishments. How? By taking stock of course difficulty instead of assigning the same letter grade to point scale conversion to everyone.

In general, weighted GPAs operate on a 0 to 5.0 scale, although some scales can have even higher point differences. For example, an “A” in an Advanced Placement (AP) class could translate point-wise into a 5.0, while that same A in a normal class would translate into a 4.0.

For schools that offer Honors classes, the scale often will split the difference with the highest possible point score being a 4.5 instead of 5.

Here is a sample Weighted GPA scale purely for comparison:

Where things get tricky is the different class levels that you can take as a high school student. If you take a mix of regular, AP, and Honors classes then it gets complicated.

In general, each class needs to be graded according to its own point scale, then all the scores are averaged together for GPA.

What colleges look at when it comes to weighted vs unweighted GPA, most of the time, is quality over quantity.

College admission boards look at a variety of factors when evaluating applicants. The reason is that they assemble the most competitive classes possible, not unlike building a sports team.

Test scores, extracurricular activities, recommendations, etc., are all taken into account. When these officials look at GPA, their criteria are not what you would immediately guess.

Admission officers have to keep the integrity of their school in mind. That charge means that they need to bring in students who are ready and able to handle the academic rigor that differentiates them from others.

Ivy League schools likely won’t admit students who had average grades in regular high school classes. Officers will first look at the kinds of classes you took in school, before obsessing over the GPA score.

If you scored straight A’s on an unweighted scale for all four years, that’s great and it won’t necessarily hurt you. Let’s say you took two Honors classes in your junior year, and only managed to earn B’s.

Don’t get upset, you are actually doing great. Why? For two important reasons, you need to know:

First, because of the higher Honors point scale, your final GPA won’t suffer. Would it be nicer to have received A’s in those classes? Of course, but because of the heightened difficulty, an Honors B carries just as much value as a regular class A.

Second, you are doing exactly what college admission officers want to see. They are looking for kids who can handle the pressure and expectations that college-level coursework brings with it.

Getting a B in an Honors or AP class shows that not only did you push yourself academically, but you did well. It also shows that you enjoy the process of learning, rather than merely completing courses.

Moreover, if you earn college credits by successfully passing an associated AP exam, those officers see how strong your commitment is and can risk accepting you into their freshman class.

So, let’s look at whether or not you should worry about having a weighted vs unweighted GPA.

As you can see, a weighted GPA definitely has its advantages. The extended point range means that even a lower weighted grade carries equal value to a regular unweighted one.

Also, the increased rigor that you must handle demonstrates to colleges and universities that you are game for the challenges that higher education presents on a daily basis.

By raising the bar for yourself in high school, you improve your chances of impressing the final decision-makers come application season. If your school does not use a weighted GPA though, don’t be nervous.

As we’ve discussed before in other posts, your college application package has many components to consider. A strong ACT or SAT score can definitely boost your profile if you have a good unweighted GPA, as well as strong recommendations and extracurriculars.

Long story short? A good weighted GPA can definitely help you, but don’t get discouraged if you don’t have one. It’s hardly the end of the world.

How Prep Expert Can Help Your GPA

If your school uses a weighted GPA and you’re looking for AP exam assistance, then we can help you out.

Besides our SAT and ACT prep courses, we also provide tutoring help with AP exam courses. If you are preparing for the AP Biology exam but need one-on-one help, we have different tutoring packages available based on hours and subjects.

Every tutoring package though is taught by one of our 99th percentile instructors, with personalized lesson plans to help you receive the help you need.

Besides our one-on-one tutoring packages, we offer in-person, live online, and self-paced on-demand video courses covering both the SAT and ACT. Either way, we have the resources and staff available to help prepare you as best as possible to get into your dream school.

What does unweighted GPA mean?

The term unweighted itself refers not to the final score, but the scale used for calculation.

What is the unweighted GPA scale?

The traditional, unweighted GPA scale runs from 0 to 4.0.

What is a weighted GPA?

The weighted GPA is used by many high schools to help better represent students’ actual academic accomplishments. How? By taking stock of course difficulty instead of assigning the same letter grade to point scale conversion to everyone.

What is the weighted GPA point scale?

In general, weighted GPAs operate on a 0 to 5.0 scale, although some scales can have even higher point differences.