After the 2016 SAT redesign, both the SAT and ACT are closer than ever in terms of content and format. However, there are still a few key differences remaining between these two standardized test formats.

Here are a few SAT vs ACT major differences to be aware of when considering which test to ultimately focus your time and studies on.

Let us help you prepare for standardized tests with our year-round SAT prep and ACT prep courses today before they have to take either test. 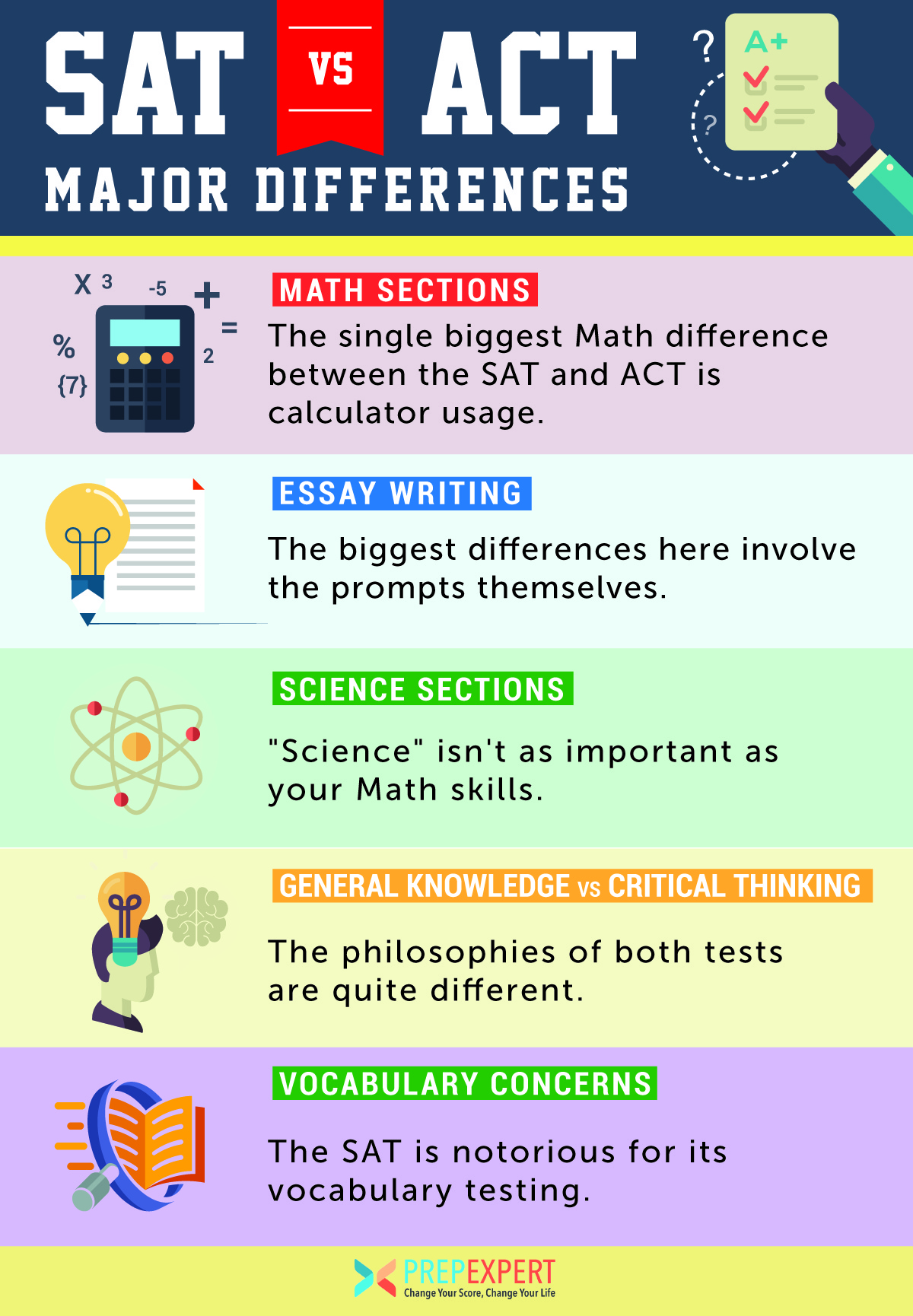 Calculator or no calculator?

The single biggest Math difference test-takers notice between the SAT and ACT is calculator usage. On the ACT, you can use your calculator on every single Math question. Whatever the question is, it doesn’t matter because you can punch in numbers.

However, on the SAT, there is a specific section that forbids any calculator usage. The plus side? The calculations are simple enough to handle without a calculator, in theory.

Also, the SAT tends to focus more on data analysis and pre-calculus. The ACT doesn’t worry about these subjects as much.

Understand first that the Essay section is completely optional for both tests. We always recommend tackling it though because:

The major differences you’ll face then are the essay prompts themselves.

One prompt emphasizes understanding, while the other tests your logic.

“Science” isn’t as important as your Math skills.

Here’s the good news. Only the ACT has a “Science” section to worry about. Here’s the bad news. It’s less about science and more about your math skills, namely graph interpretation, and data analysis.

The SAT doesn’t offer a corresponding Science section, it tests Math directly instead. However, because of how the ACT breaks up its points per section, Math is only worth about 25%, while on the SAT it jumps up to 50%.

If you’re better at Math, then the SAT will suit your skills better. If not, then spread the risk out on the ACT.

The philosophies of both tests are quite different.

For example, in the ACT, you will deal with more grammar questions that test your knowledge of rules.

On the SAT, you will be challenged more by examining the writing style and how ideas are expressed by the author. If you don’t enjoy performing critical thinking under pressure, then the SAT will present problems for you.

The SAT is notorious for its vocabulary testing.

Before the 2016 redesign, the SAT was feared for its “Sentence Completion” questions where students were tested on often obscure vocabulary. While the redesign eased up the difficulty somewhat, the test continues to feature high-level vocabulary in its questions.

The ACT has always been more straightforward in this respect. If you want to take the SAT, then make sure to work in basic vocabulary reviews or else you’ll get caught. Your score will then pay the price.

What’s the biggest difference on the Math sections for both tests?

The single biggest Math difference test-takers notice between the SAT and ACT is calculator usage. On the ACT, you can use your calculator on every single Math question. On the SAT, there is a specific subsection that forbids calculator usage.

Do both tests have a Science section?

Only the ACT has a Science section to worry about. Here’s the bad news. It’s less about science and more about your math skills, namely graph interpretation, and data analysis.

What’s the biggest differences between what each one tests?

On the ACT, your general knowledge is tested. You’re asked direct questions about knowledge retention. On the SAT, your critical thinking skills are tested. You face more creative questions in nature, versus spitting back straight facts.

What are the basic differences between the SAT and ACT essays?

The SAT prompt emphasizes understanding, while the ACT tests your logic.